Once again, MARC has been asked to assist Murray City with communications during the upcoming Murray Fun Days parade on 3 July 2021.  We have participated in this event before (in 2019... there was no parade in 2020). 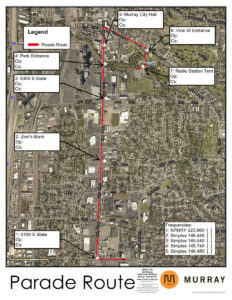 This year, we will be following the same parade route as previous city parades and will once again have seven stations that will need amateur radio operators.  Some people have already identified their preferred station, but several are still up for grabs.  You can see the parade route to the right (click on the image for a larger version).

Note that we are planning to use our 220 MHz repeater this year instead of the simplex frequencies that we used before.  If you would like to participate but do not have a radio capable of operating on the 1.25m band, the club does have several radios available for check out.  Note that these radios have not been used or maintained in two years (thanks to COVID-19) and may need a little TLC to get them working effectively again.  If you want to use one of these radios, contact Sam (KG7MLL).  They are currently stored in the station 83 radio room, but we will be pulling them out, dusting them off, and bringing them to the club meeting next week.  We think there are four radios available that work.

Alternately, you might look into purchasing a tri-band HT.  Amazon has a few...

(NOTE:  these are affiliate links... any proceeds from purchases made using these links go directly to support the operation of the Murray ARC web site.)

You may also find better deals on eBay... I know I got an AnyTone AT-5888 UV III  on eBay for a comparable price to the offering on Amazon, but the eBay one also included a separation kit (to allow mounting the head separately from the radio body).  Look around and you'll probably find some good deals.  Please feel free to leave links to them in the comments here!